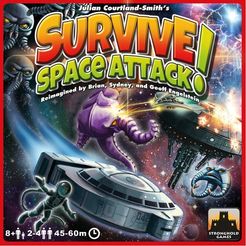 Once upon a time, in the magical 1980s, a much younger me was riffling through drawers in the storage room in my house when I stumbled upon a board game that I had no idea we owned. The cover had cartoon people rowing boats and swimming in a creature filled ocean while a volcano erupted in the background. The title of the game took up most of the box and simply read “SURVIVE!”.

Being very young at the time the game served mostly as a toy, having a large number of colourful, and not to mention highly swallowable, pieces. The rules were in a small book and not on one sheet or printed inside the box lid. I remember attempting to read them on occasion, but I didn’t get very far. The rules book, all the components, even the smell of the box had this distinctly ‘adult’ nature to them. The idea that grown-ups had their own board games struck me as a revelation. It seems silly now, but the memories have stayed with me to this very day. When Stronghold Games announced plans not only to remake the original Survive but also to release a separate version with a space theme and updated rules I was excited to see what I missed as a child. Does Survive: Space Attack live up to the hype I built up all those years ago?

END_OF_DOCUMENT_TOKEN_TO_BE_REPLACED 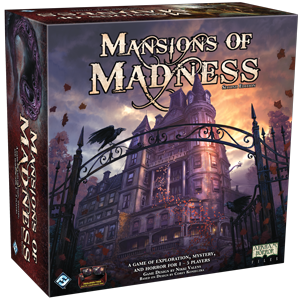 The advent of new technologies has brought an interesting time for board games. How long will cardboard and dice be the core of the tabletop experience when we’re all increasingly tied to our portable computing devices of various sizes and holographic technology seems to be the next big thing. Until the day we have table sized tables and ubiquitous holo-lenses our smartphones, tablets, and PCs have the potential to become a powerful component to enhance tabletop gameplay. When revising Mansions of Madness for its second edition, Fantasy Flight Games took the bold step of replacing a major part of the original game with a free-to-download software application. Does this gamble pay off and improve the experience or is it just a gimmick?

END_OF_DOCUMENT_TOKEN_TO_BE_REPLACED

It’s no secret that I love games with a strong theme. Games where the aesthetics, concepts, and mechanics are tied together, are the ones that draw my attention. On the other hand, I do understand that sometimes theme based mechanics can get bogged down in details to make them coalesce, adding too many layers of complexity to truly make it an enjoyable experience (I’m looking at you Dungeon Pets). Finding games that balance the richness of a great theme and flow of mechanics is one of those great joys I have as a board game enthusiast, and when a game like Scythe comes around and falls right in that sweet spot, I know I’ve found an extraordinary gaming experience.

END_OF_DOCUMENT_TOKEN_TO_BE_REPLACED 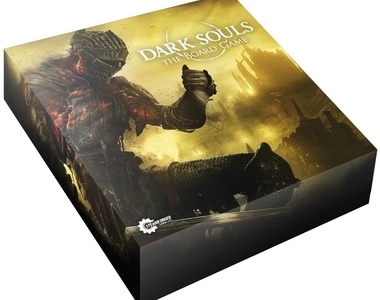 The Dark Souls video games, a dark fantasy action RPG hybrid, have been played by millions, would seem ripe for a tabletop interpretation as part of an elaborate pen and paper RPG. Steamforged Games took the risky move of bringing the beloved IP to Kickstarter as a full-fledged miniature-based board game. Dark Souls: The Board Game’s Kickstarter looked extremely promising and broke backing records for tabletop games, bringing with it the high expectation of quality and fidelity to the source material. Does Dark Souls: The Board Game meet its lofty goal of bringing the on-screen experience faithfully to cardboard or is it destined to die a quick death?

END_OF_DOCUMENT_TOKEN_TO_BE_REPLACED

The MOBA, or Multiplayer Online Battle Arena, is currently one of the hottest trends in competitive online gaming. Games like League of Legends are a cornerstone of the E-Sports world but very little attempt has been made to bring its more recognizable aspects to board game form. Known for a cast of colorful characters and simple yet deep mechanics it would seem like the elements of the genre would be ripe for cardboard plunder. In swings Rum & Bones: Second Tide by CMON Games, recently released sequel and re-implementation of the original swashbuckling MOBA based board game of pirate ship duels on the high seas that aims to bring the same kind of experience as the genre of online game around the table. END_OF_DOCUMENT_TOKEN_TO_BE_REPLACED